Estimated crowds of 125 on Friday, May 15 and 110 on Saturday, May 16 watched the Loudonville High School Class of 2015 present Shakespeare's Othello at the LHS cafeteria.  The event included a spaghetti dinner served by class members.

Featuring an all male cast and the modern "No Fear Shakespeare" translation, the production closely followed the original and tragic story line, but injected moments of comedy whenever possible.  There were anachronistic props like Star Wars light sabers and references to a current Snickers candy bar commercial.  Scenes also included parodies  from the movies "A Few Good Men" and "Airplane."

These modifications to the script, along with some outlandish costumes and makeup on the three male actors playing female roles, frequently had the audience and sometimes even the cast itself laughing for extended periods.  Laurie Weber, the mother of Josh Weber who was cast as Othello, said she overheard two gentlemen remark that a Shakespearean tragedy had been very successfully turned into a comedy.

At the close of Saturday night's performance, the cast and crew presented director Aimee Ross with a dozen red carnations.  Mrs. Ross jokingly remarked that the unique presentation and interpretation by the Class of 2015 might mean Othello is never again studied in her high school English class.

The Loudonville-Perrysville School Foundation thanks the many people who helped with this event.  Over 30 members from the Class of 2015 were involved as either cast, crew, dinner servers, or clean-up crew.  Aimee Ross directed the play, and the meal was coordinated by Eric Stoner with kitchen help from Bill and Shawna Scarberry.  Kerry MacQueen provided centerpieces and other table decorations.  Many other parents donated food items or baked goods for dessert.  The school administration provided kitchen and custodial help for both nights of the show. 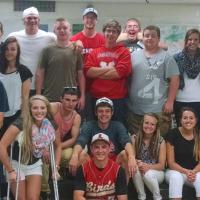 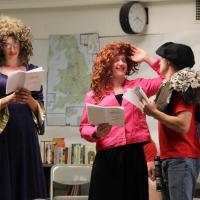 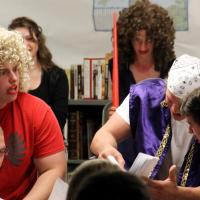 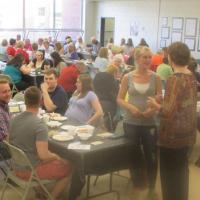 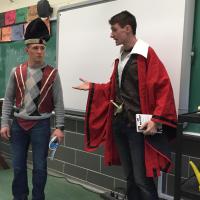 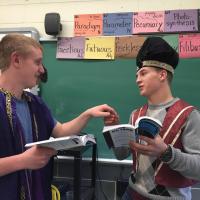 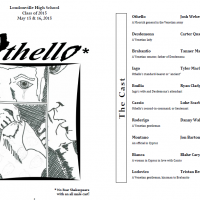